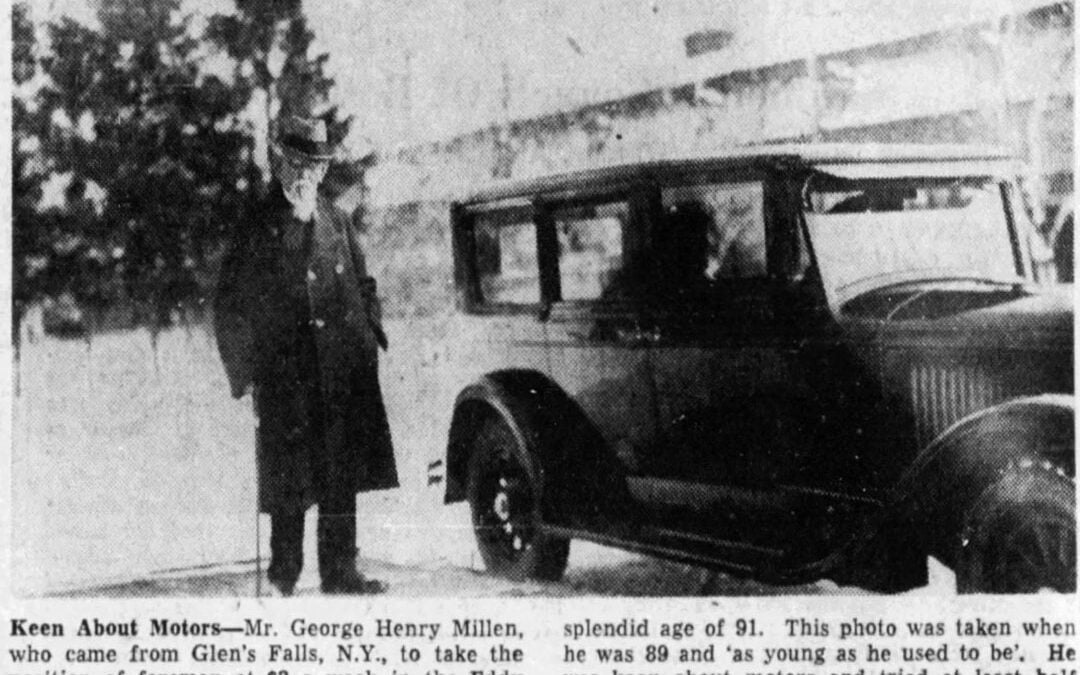 We’ve been looking for Ottawa’s earliest documented automobiles. So far we have Thomas Ahearn of the Ottawa Electric Railway driving an electric car on the streets of the capital on September 11, 1899.

The next documented person to drive a car in Ottawa is George Millen (1938-1928). In 1900, he was superintendent of the E.B. Eddy Company works in Hull. Later, he became president of the company.

Millen is the guy you see at the top of the page who looks like he just stepped out of a ZZ Top music video. You might have been in his house. It was a little place along Taché Boulevard in Hull called Standish Hall, which later became one of the region’s major nightspots. You may have danced there.

The year 1900 is important because that’s the year we know George Millen bought a car. Such outlandish behavior was worthy of a newspaper story at the time.  The story appeared on August 9, 1900 when the Ottawa Journal reported:

“Hull will soon have an automobile. George Millen, superintendent of the E. B. Eddy Company’s works, who has returned from a trip to New York, bought an automobile while he was away. The vehicle is expected to arrive tomorrow.”

The Journal article doesn’t give the make, but several later accounts suggest Millen’s car was a steamer. At the time, gas, electricity and steam were all competing sources of motive power for automobiles. Steam was in many ways the most mature of the three technologies, having been used for more than a century to power boats, trains, and machinery. E.B. Eddy, it might be worth noting, had its own steam railway, used to move pulp and logs around the Eddy yards. So it makes sense that Millen bought a steamer.

Specifications for a standard steam Locomobile in 1900, with a gas tank of 5 gallons and a water tank of 25 gallons. What I like best are the accessories, including a rubber bucket for fetching water, a gong for warning people you were coming, and a full set of tools — because you’re going to need them! 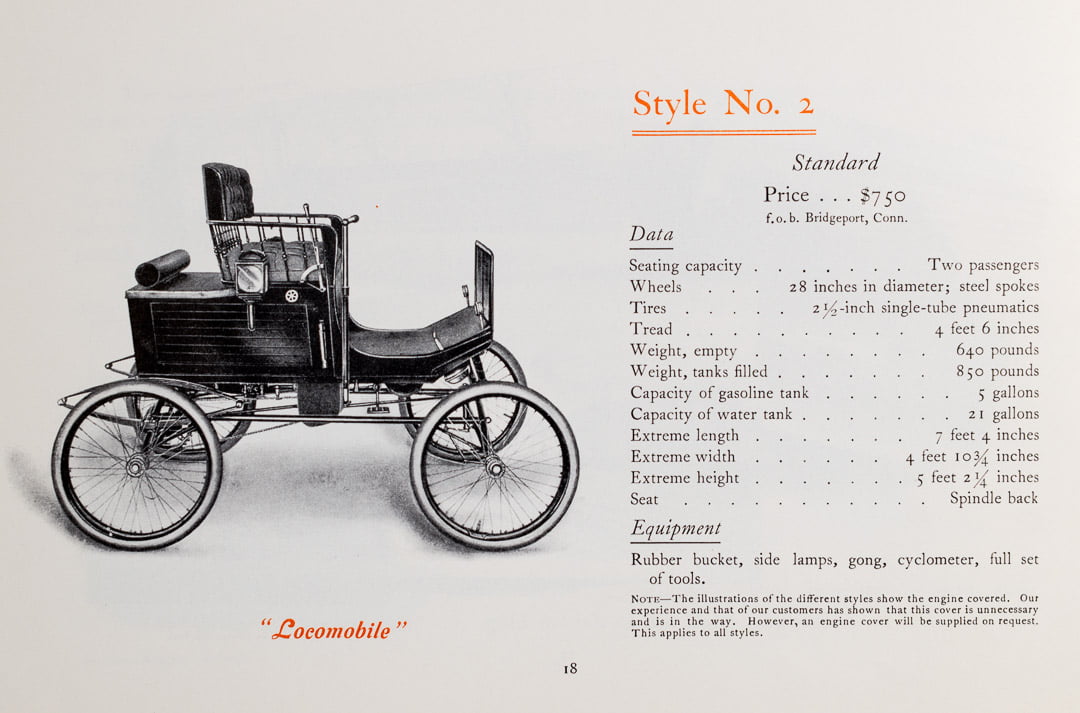 Years later Millen’s daughter confirmed the fact that her father’s first car was indeed a steamer. She even remembered the make, telling Ottawa Citizen columnist Madge MacBeth in May of 1955 that the car was a Locomobile.

Miss Millen — as she was always known — went on to say that her father picked up the car from the factory in Tarrytown, New York, and drove it back to Ottawa. “It took him ages to get to Kingsville,” she recalled, not because of the car, but because there were so many toll roads. Every time Millen steamed up to a toll gate he had to stop and wait while the toll road operators figured out what to charge for such a weird conveyance. A carriage with no horses? It even happened in Bell’s Corners where Millen stopped to fill up his steamer with water before taking the Richmond Road toll road into town.

Unfortunately, Miss Millen’s recollections present several problems, starting with the make. That’s because, if we assume her father’s steamer came from Tarrytown, then it wasn’t a Locomobile.

What? Here we have to delve into some car-nerd history, beginning with brothers Francis and Freelan Stanley who developed their first steam car in Watertown, Mass., in 1897. Over the next two years they made various improvements and then won a hill-climb contest (very popular at the time, since many early cars couldn’t actually make it up hills). Winning the contest created an unexpected problem for the Stanleys, who initially had no intention of starting a car company. However, victory in the hill climb brought in 200 orders for automobiles. This led to an offer they couldn’t refuse from John B. Walker, editor and publisher of Cosmopolitan magazine in New York, who bought the rights to produce the Stanley-designed automobiles.

Walker was rich, but not rich enough to finance a car company on his own, so he sold a half-interest in the project to an even richer New York paving contractor named Amzi L. Barber.

No one really knows why the partnership blew up. What is known is that both men started making the same car based on the Stanley design. Barber called his steamers “Locomobiles” and made them in Newton, Mass, later moving his factory to Bridgeport, Connecticut. Walker called his steamers “Mobiles” and made them in Tarrytown. To add to the confusion, both Walker and Barber employed the Stanley brothers as consultants and plant managers. Even more baffling, a look at the advertising of the time shows that Mobile also called their vehicles Locomobiles. 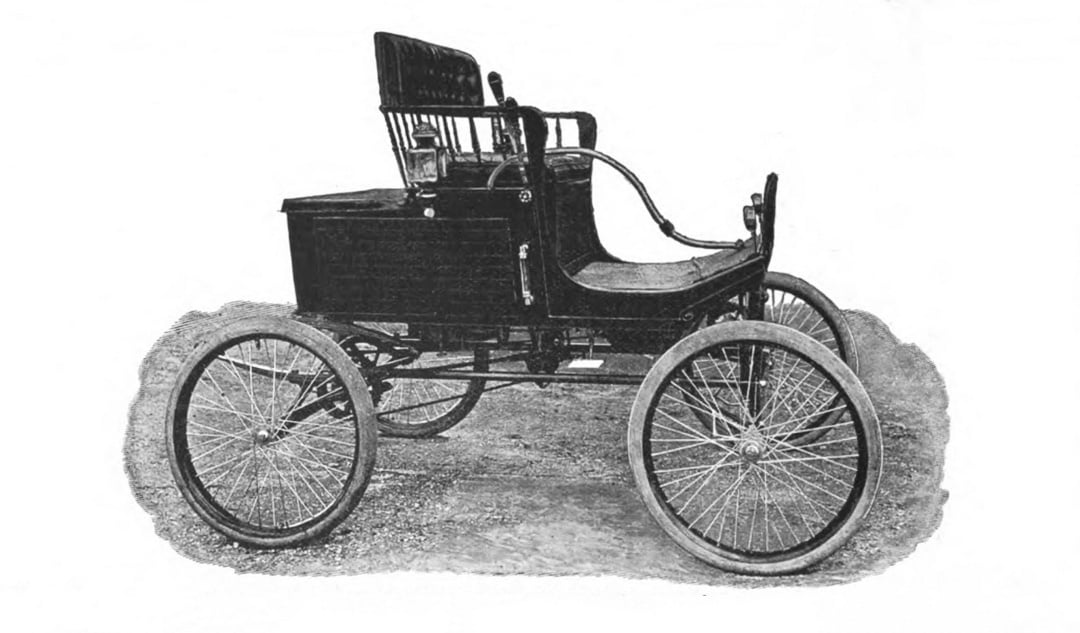 A Mobile steam runabout from an ad in a 1900 magazine. Like most cars of the time it really did look like a “horseless carriage.”  Mobiles were steamers and virtually identical to Locomobiles.  The engine was under the seat. The boiler and water tank were under the rear deck. You could get 22 miles on one tank … of water.

The point is, if Millen’s car came from Tarrytown as Miss Millen said, then Millen’s steamer was actually a Mobile, which just happened to be identical to a Locomobile and was often called a Locomobile. Clear as mud!

Miss Millen said her father took his first ride when he picked up his steamer in Tarrytown and drove it to Ottawa. This doesn’t seem very likely.

Tarrytown is just outside New York City, about 700 km from Ottawa. The drive takes seven hours today at 100 kilometers per hour. Millen’s car might have averaged 10 or 12 kph, but could only go about 30 kilometers on a tank of water. That’s a very long drive.

Early Mobiles and Locomobiles were “runabouts,” with hard rubber tires on four bicycle wheels and a bench seat in the middle. The small two-cylinder steam engine was under the seat. The water tank and boiler were under the rear deck. The boiler was normally fired by naphtha gas. The gas boiled the water, the resulting steam pushed the pistons, and the pistons turned the wheels. There was no roof, and no windshield, so if Millen drove back from Tarrytown, the ride to Ottawa would have been a dirty one.

Then there’s the issue of roads, which at the time were more or less non-existent, or at best mud tracks. It’s not clear that Millen could have driven to Ottawa from Tarrytown even if he wanted to.

Mobiles and Locomobiles were virtually identical. Here’s a Locomobile from 1899 in the collection of the Science and Technology Museum. You can see the steam engine under the seat. This car was restored in the 1960s before it came to the museum, but not quite correctly. It should have had the straight dashboard seen in the picture above. The tiller should have been in the middle. The rest of the car is accurate. George Millen’s steamer would have looked much like this one.

It makes more sense to think that Millen had his car shipped to Canada as the Journal article of August 1900 seems to indicate when it said “the vehicle” would arrive the next day, but doesn’t mention Millen arriving with it.

It’s also possible Millen shipped his car to the border, then went down to pick it up. He could have driven back in a day from Prescott or Cornwall. On the other hand, Miss Millen said it took her father ages to get 41 miles to “Kingsville.” The only Kingsville currently in Ontario is in Essex Country, near Windsor. It makes no sense for Millen to have picked up his car anywhere near there when he could have had it shipped straight north. Maybe a misprint for Kemptville?

It’s a mystery. Then again, Miss Millen was recalling events some 55 years after the fact.

Possibly, Miss Millen was thinking of “King City,” which is north of Toronto, or maybe King Street in Toronto itself. In that case, Millen could have purchased a Locomobile from the National Cycle and Automobile Company. This was a syndicate of American companies selling bicycles in Canada. It was put together in 1899 to combat Canada Cycle and Motor (CCM), which was a syndicate of the all the major Canadian bicycle manufacturers. Both companies knew automobiles were the coming thing, and that’s why they included “automobile” in their name. Locomobile (at least Locomobile Canada) was part of National Cycle group. They made the vehicles in Hamilton until 1902. Their major showroom was in Toronto on King Street West.

According to auto historians Hugh Durnford and Glen Baechler, authors of Cars in Canada, the “Canadian” origins of Locomobiles made them extremely popular cars at the time. So it’s possible that George Millen actually bought his steamer in Toronto and drove it back from there. We need more info.

However Millen’s automobile made it to Ottawa, he apparently used it to take E.B. Eddy for his first ride.

According to John Taylor, a man who started off as a messenger boy for E.B. Eddy, eventually becoming Vice-President in a career lasting over 75 years, Wellington Street was chosen for the trip, but the ride proved to be a short one.

“When a few blocks had been negotiated, Taylor told the Citizen in September of 1954, “the car was brought to a trembling halt and Mr. Eddy climbed out. He was white as a sheet and his legs shook so that he could hardly stand.”

Mr. Eddy usually had words to meet every situation, Taylor recalled, often profane words, but after his first ride in an automobile, Eddy was speechless. All he could manage was a feeble wave of the hand as he tottered away. 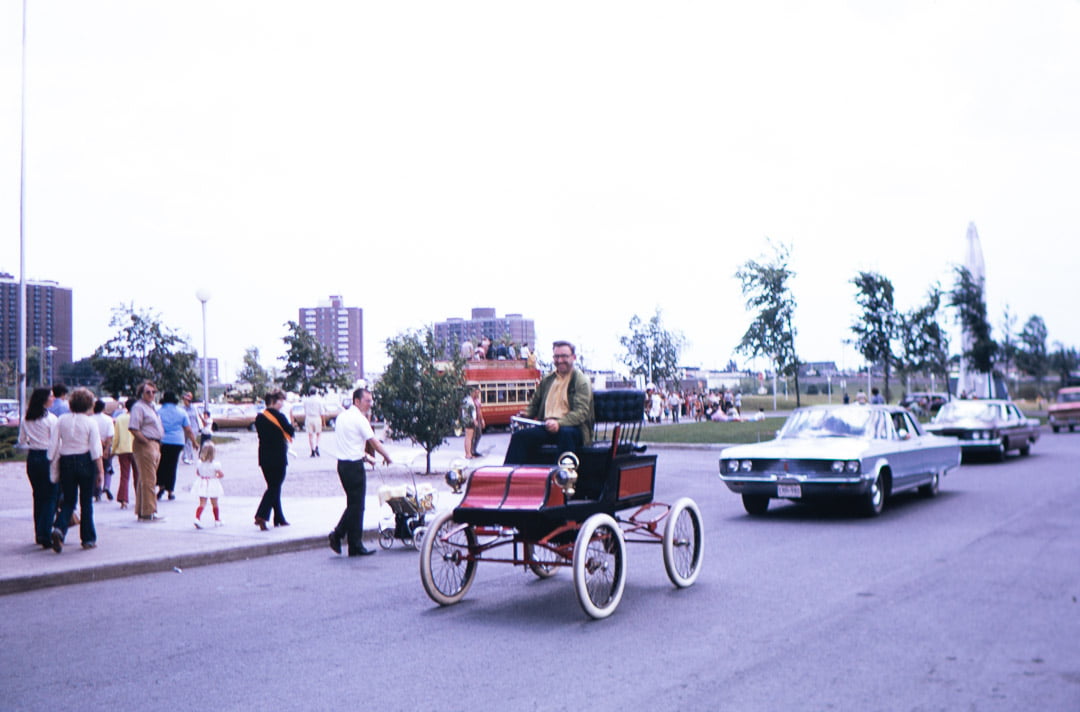 Here’s another look at the Locomobile steamer in the collection of the Science and Tech Museum and the thing is — you might have had a ride in it. The museum used to run the steamer on compressed air and take people around the parking lot on Canada Day, and later on Techno-Days. If you didn’t get a ride, you still might have seen it. The car was on display for years.

Not much more is known about Mr. Millen’s steam car except that he caused something of a sensation by driving it to Aylmer on August 15, 1900. As the Journal reported the next day, it took him half an hour to get as far as the post office. As Millen drove up Main Street dogs began to bark. Men, women and children rushed out to see his strange contraption running along so swiftly and silently. Millen caused a similar sensation driving the car to the Exhibition on September 18, 1900.

After seeing Millen’s steamer, one local was heard to say: “I’m going to have one like it, just as soon as I can scrape up the cash.”

He would have needed around $1200 U.S to buy it new, about $40,000 today. Two years later that same local could have bought Millen’s own car. That’s because the last notice we have of Millen’s steamer is an item in the Citizen want ads for July 16, 1902. It reads:

Who bought it and what happened to it is unknown, but Miss Millen has a final story about her father that’s worth telling.

According to Miss Millen, her father replaced his steamer with a gas-powered Oldsmobile, then decided to try a Ford and went to Detroit to investigate.

Millen was prepared to pay as much as $3,000 for the car. Henry Ford suggested he invest the same amount in the Ford Motor Company.

Millen, not impressed with the Ford plant, which  was smaller than the Eddy blacksmith shop, decided not to invest.

Years later Millen would say ruefully: “Well, hind-sight is better than fore-sight. I slipped up on that deal!”

Above: One of the more ridiculous ads I’ve seen over the years, showing a group of gentlemen playing polo in their Mobile steamers in 1900. One guy has even taken a header out the front, but at least he didn’t go through the windshield — because there was no windshield! 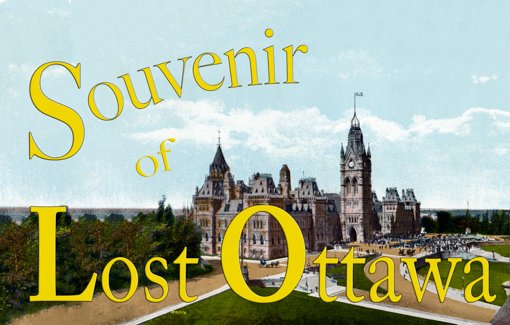 Join our mailing list and keep up to date with the latest Lost Ottawa news. Plus get our free book!

You have Successfully Subscribed!